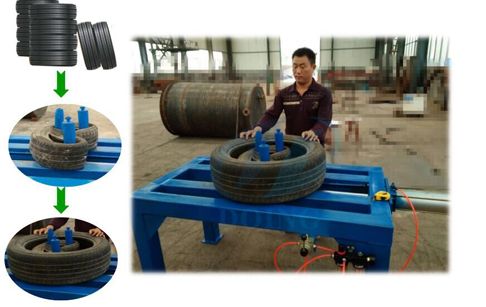 The tyre is compressed by tyre doubling&unpacking machine. 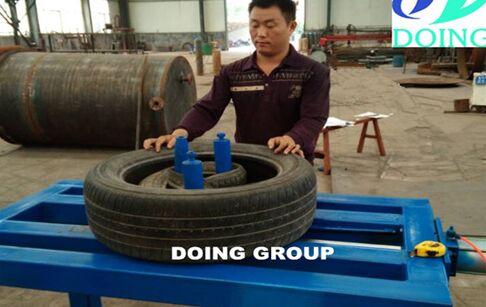 The compressed tire is nested in a unbroken tyre.

This small tyre doubling / unpacking machine is ideal for any workshop or used tyre dealer, used to double or undouble (unpack tyres). It is powered by compressed air only so there is no risk of electrocution. We recommend this machine for the tyre dealers wishing to save space for storing or transport their scrap or used tyres. Due to its small dimensions and weight it is ideal for moving from one place to the other. 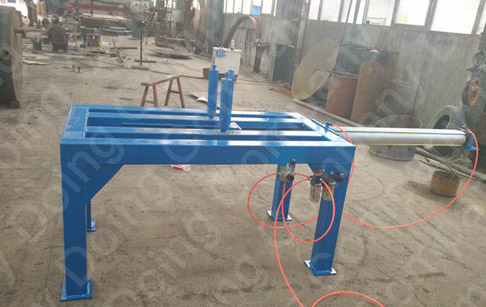 ♦ Compared to other tire processing machine, like tire cutting machine, this small tyre doubling / unpacking machine has several main advantages as below:

2. For some tyre pyrolysis factories, they want to fill as many tyres as possible inside the reactor for pyrolysis to oil. But as we all know that tyres contain steel wire which is difficult to press. This time you will need to use a tyre cutter to cut tyres into small pieces. But after cutting, the steel wire inside tyres will become small pieces mix with carbon black after pyrolysis process, which is difficult to separate. For tyre doubling machine, you can use it to make several complete tyres together, then put them into the reactor. It can not only save the plave, the steel wire inside tyres also can keep complete. After pyrolysis, the big steel wire can tangling together, which is easy to pull out by a hook.

3. This tyre doubling / unpacking machine doesn't need electricity to work. It powered by compressed air. which can save so much energy.