Pyrolysis refers to the conversion of a sample (mainly a polymer compound) into several other chemical processes (mainly low molecular weight compounds). Pyrolysis also has different meanings, but there is one word (pyrolysis). 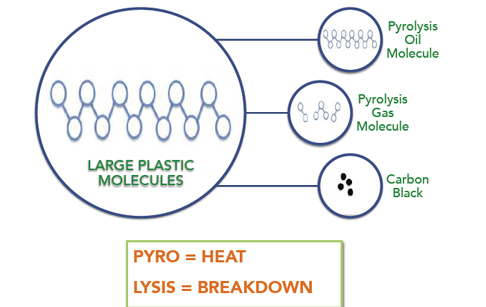 At present, the main raw materials are naphtha, kerosene, diesel oil and developingto heavy oil. In the pyrolysis processing, accompanied by condensation, cyclization and dehydrogenation reactions. Since the reaction occurs very complex, the reaction
is generally run in two stages. The first phase, Raw material pyrolysis to ethylene, propylene, this reaction is called first stage. In the second stage, a reaction of ethylene, propylene, the reaction was continued into alkynes, allenes, aromatic, even converted to hydrogen and carbon black, this reaction is called the secondary response.Therefore, the cleavage product is often composed by a mixture of various components. Temperature and duration is the first basic factors to affect pyrolysis, as well as the kind of the hydrocarbon feedstock. Chemical production method is using pyrolysis way through the pyrolysis plant to convert oil into small alkenes, alkynes and aromatic hydrocarbons, such as ethylene, propylene, butadiene, butadiene, acetylene, benzene and toluene.

Pyrolysis or cracking, thermal cracking, pyrolysis refers to the absence of oxygen, high temperature decomposition of organic matter. Such reactions of compounds commonly used in the analysis of complex structures, such as the use of pyrolysis gas chromatography - mass spectrometry.

Industrially, the pyrolysis reaction can be used for the synthesis of chemical products, such as polyvinyl chloride may generate pyrolysis to PVC. In addition, it can be used as biomass or waste into something can be reused less harmful substances, for example, use this method to make syngas. Pyrolysis is similar with distillation; they are both belong to pyrolysis reaction. If the pyrolysis temperature rises again, carbonization reaction will be occurred; then, all the recatants will convert to carbon.

The main types of pyrolysis

Lysis can be divided into the following main categories:

Hydrous pyrolysis: such as steam lysis of oils and organic waste by pyrolysis to extract light crude oil.

In addition, due to the oxygen supoly is typically less when firing, therefore the fire reaction is similar with pyrolysis. This is also the important reason pyrolysis reaction mechanism and character.